Making Some Tweaks With the New and Improved File Explorer Tool

If you were born in the early 1990’s then you’ve surely seen some of the major Windows operating systems being released. Our world has truly been made better by computers and as years of development and innovation pass, our favorite Windows Operating System also gets better. More than a month ago, the latest Windows OS edition Windows 10 dubbed as “the best one yet” has been released and along with it are several changes that are now based on user feedback gathered through the Windows Inside Program.

While most of the improvements in Windows 10 are obvious, there are also others which are not seen readily when you open your computer for the first time but it can bring a big impact in the way you interact with the system especially when you’re dealing with some files, folders and all of the other stuff that are stored in your machine’s hard drive. One of these less obvious improvements are found in the File Explorer tool and in this tutorial, we will be looking into what these changes are and see how we can customize the way this tool works in order to make you become more productive than ever so be sure to fire up your Windows 10 computer and follow each of the steps that we will be demonstrating below. 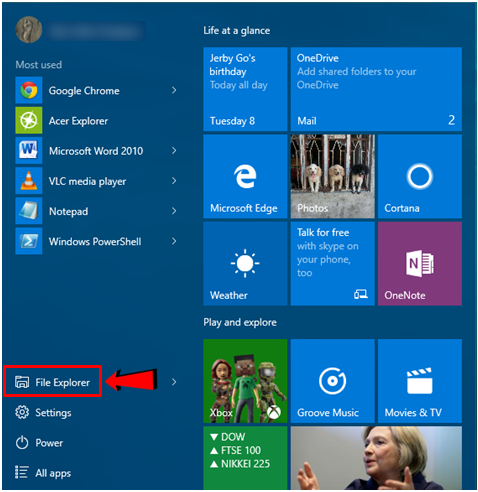 New Options in the Ribbon

This change is not that obvious because of the default starting location of the File Explorer tool in Windows 10 which is the new “Quick Access” section but if you click on the “This PC” link from the navigation pane at the left as highlighted on the screenshot below, you will be able to get access to a different set of tabs on top of the File Explorer Window. From these tabs, simply click on the one that is labeled “Computer” and on the ribbon-based options that would appear, you will see a new item which is labeled “Open Settings”. 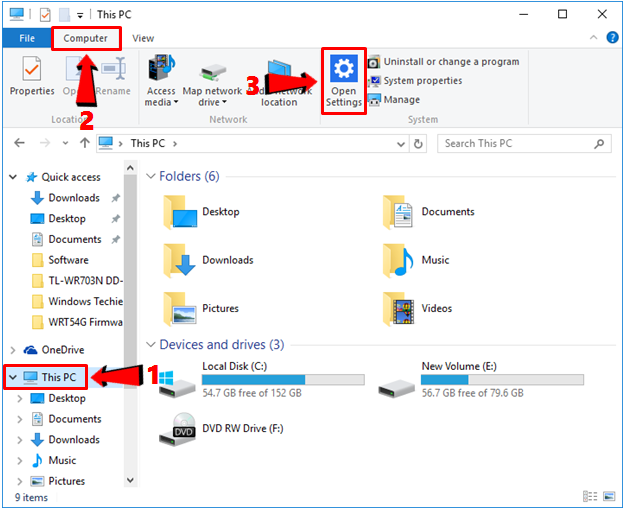 What will open next is the modern Settings Window which has been a bit hard to access back in Windows 8 and Windows 8.1. This move to include a button for launching the Settings Window from File Explorer is truly a great improvement that will surely increase productivity and make access to your computer’s options and tweaks a lot easier!

When you open File Explorer in your Windows 10 computer for the first time, you will notice that it will take you directly to the “Quick Access” section which isn’t the normal place that you would be taken into back in Windows 8 and Windows 8.1. The default location in these Windows OS versions is the “This PC” section but in Windows 10, the default starting location was changed and is now set to the Quick Access list as you can see on the screenshot below. 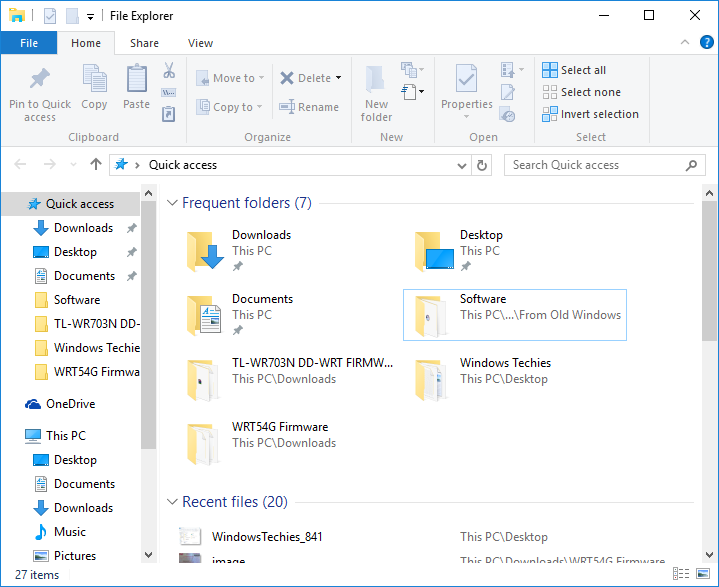 If this makes you confused and you want to set “This PC” as the starting location then you don’t need to panic because we will show you how it is done below so just keep reading towards the end of this tutorial to learn even more!

As we have mentioned earlier, File Explorer’s starting location in Windows 10 has already bee changed from the “This PC” section to the new “Quick Access” list which works much like the Favorites section back in Windows 8 and Windows 8.1. While there are some who would consider it very much similar to the Favorites section, it is actually a new feature that is far better than the former. For instance, this new Quick Access section in Windows 10’s File Explorer allows the pinning of folders, libraries and even drives to it and it also offers instant access to all of the stuff that you have recently opened in your computer. Aside from that, you can also clear the history in case it gets crowded creating a feel of comfort while providing access to the more recent files and stuff that you have worked with in your Windows 10 computer.

However, there would surely be others that will feel annoyed with the Quick Access section and want the old “This PC” section back as File Explorer’s default starting location. Well, if you would like to do this tweak as well then you will first need to click on the “Quick Access” link that is found on the navigation pane at the left as highlighted below. 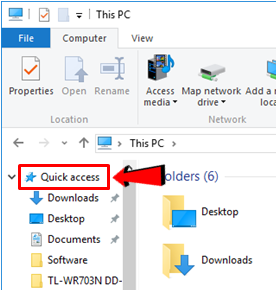 You can also click on the “This PC” link if you want then once either of the two section opens, just click on the tab that is located on the top of the File Explorer Window which is labeled as “View” in order to display all available ribbon-based options under it as shown below.

Now, from these ribbon-based options that have appeared, you will simply need to click on the one that is located at the extreme-left end which is labeled “Options” and after doing so, a small Window which is labeled “Folder Options” will appear and will automatically open the “General” tab as shown on the screenshot below. This is where we will make the final tweak which will change the Starting location for the File Explorer tool. 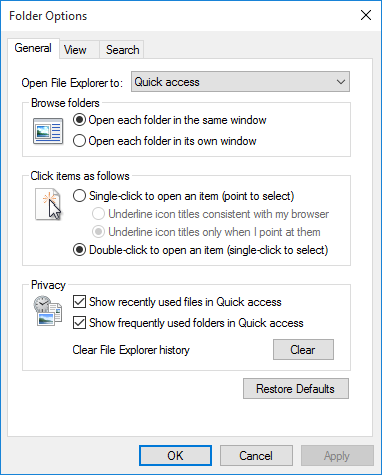 To change the starting location from “Quick Access” to “This PC”, all you need to do is click on the drop-down options box that is located at the right of the “Open File Explorer to” option as shown below and from the options that would appear, simply select “This PC” and click on the “Apply” then “OK” buttons at the bottom in order to save all changes made. 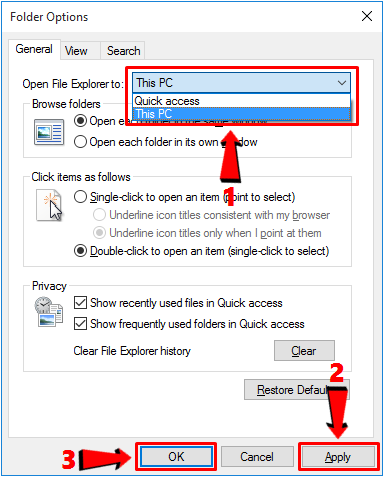 After the change is applied, you should now be taken to the “This PC” section instead of the “Quick Access” whenever you open File Explorer in your Windows 10 computer but in our next tutorial, we will be showing a tweak that will allow you to assign any folder as the starting location for the File Explorer tool instead of the “Quick Access” or the “This PC” sections. If you want to learn all of these plus some bonus tricks then be sure to stay tuned-in with us here in WindowsTechies.com as we take you to a journey of discovering even more about the latest Windows OS version- Windows 10!