What Exactly is Windows 10’s SmartScreen and What is it Used For?

Windows 10 has brought a whole new world to long time Windows operating system users because of all the changes that were applied to it which includes navigation, appearance and personalization improvements, better performance and security against the threats and dangers that are hiding in the dark corners of the web. Yes! Going to different places within this latest Windows edition is now made easier.

Booting time has also been significantly reduced which means that problems regarding your computer refusing to boot up normally is also minimized and best of all, Windows 10 also has some built-in security features that are all designed to make you even safer while doing your regular browsing routine.

One of these security features is called the SmartScreen and if it is your first time to hear about it then you’ll need to read this tutorial from top towards the very end to better understand what it really is and learn how you can take advantage of it being one of the built-in features that is found in your machine.

So how does Windows SmartScreen look like? Why is it considered an important feature in the operating system that we’ve all grown up with? If you have already encountered it in the past then you should already be aware that it appears in the form of a prompt or a notification that suddenly pops-up on your computer screen whenever you are trying to download something from the Internet which you’d like to install.

SmartScreen is actually a filter that looks into files, programs and other forms of software that you’ve downloaded checking whether or not they are verified, digitally signed and are safe to be installed on to your Windows machine.

This happens whenever you do the downloading from Internet Explorer or Microsoft Edge. Below are some of the possible notifications that you might meet whenever SmartScreen does its job on your computer. If you are using the Desktop version of Internet Explorer, you should be able to see a notification that looks exactly like the one shown on the screenshot below. 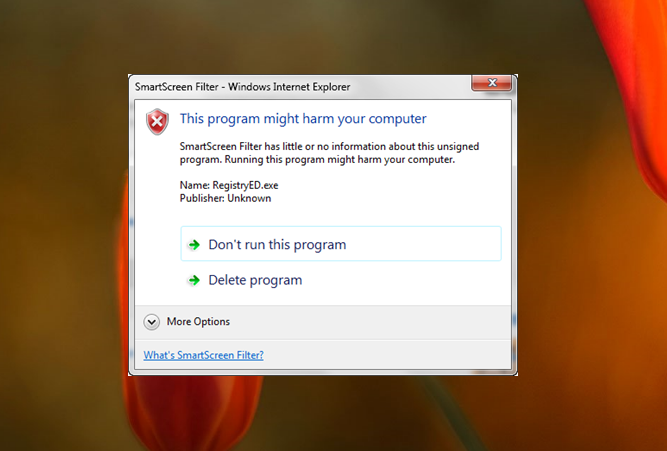 As you can see, there’s a warning that says the file or program is not safe and that it has little to no information on its publisher therefore, it is not digitally signed and programs like it might harm your computer. The just below the message, there are two options available which are “Don’t run this program” and “Delete program”. These are the two best choices that you have but if you are sure that the program is safe to install then there’s a way in running it anyway as you will see later on.

Now, if you are using Windows 8 or Windows 8.1, you need to be aware that Internet Explorer doesn’t only come in its traditional Desktop program version but it also has a modern app counterpart and if you used this version of Internet Explorer for downloading something that you would later on install to your computer, the SmartScreen filter prompt will appear at the bottom of the Internet Explorer App Window as shown below.

Again, there are three buttons to the right which are “Delete”, “Run” and “Close”. If you are not sure whether the program is safe or not then you’d better “Delete” it while if you know that it can’t do any harm to your machine then you can choose the “Run” button. If you badly need to install the software you’ve just downloaded but you are not sure whether or not it is safe, you can just choose to click “Close”, research about the software first then just go into your computer’s “Downloads” where you can find the downloaded file then run it from there in case you find out that it is actually safe to run.

Finally, if you are using Microsoft Edge, the SmartScreen would somewhat look different but the notification message that it says is basically the same as shown on the screenshot below. If it tried to protect your machine from a program that you tried to run and it detected that the file itself is potentially dangerous, it would show a slightly longer notification. 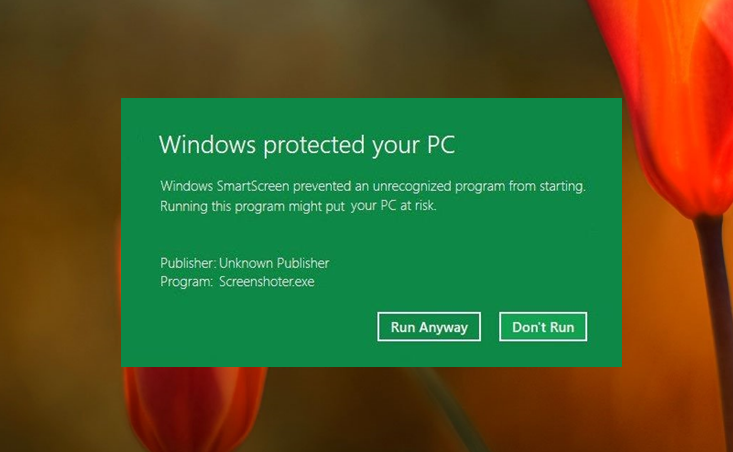 In other instances, the notification message is quite short as you can see on the screenshot below.

Now, what if you are sure that the program is safe but SmartScreen says it’s not? What if you badly need to run and install it to your computer? That’s what we’re going to discuss later on but before that, let’s first learn what exactly is this SmartScreen feature that sometimes becomes quite annoying. Let’s get into a little bit of its history.

What Exactly is Windows SmartScreen?

Now that you already know Windows SmartScreen’s looks and appearances in different Windows versions, it is time to learn what it is actually used for? What is this feature and why is it important to keep it active on your computer?

Windows SmartScreen is a security feature that has been introduced back in Internet Explorer version 8 and it is designed to protect users from malicious programs and apps that are found around the Internet. It is a filter that inspects your downloaded programs and software checking whether they are safe to be installed or not.

It does this by checking on a large database which contains information on software programs that has been downloaded and installed by other users and sees which ones were downloaded and installed without any problem coming into the surface. Generally, if a file has been downloaded by millions of people and there’s no evidence of it causing any problem then SmartScreen sees it as safe while files that were downloaded by a few and has reports about problems right after they are installed then they are considered unsafe and harmful.

SmartScreen also filters the websites that you visit and compares them to a regularly updated list of websites that has reportedly been involved in phishing attempts and other malicious cyber crimes. If it sees that the website you’ve just visited contains harmful content based on the list found on the database then it automatically warns you in the form of a notification as we’ve already shown above.

Does Smart Screen Really Work? Is It Effective?

You’ve heard us many times in our other tutorials that downloading files from the Internet has its own risks and those risks are exactly what SmartScreen tries to rid you from! It sure becomes quite annoying at times since it also considers less popular software as unsafe ones but there are different surveys that conclude with one important observation which each Windows user must know about.

The conclusion clearly says that Internet Explorer/Microsoft Edge is a very secure browser because of the existence of the SmartScreen feature. It has even been found out that in terms of detecting malicious and potentially dangerous programs, these browsers outperform others- thanks to the SmartScreen security feature!

How to Bypass SmarScreen and Install the Program You Want

Finally, we now come to the last part of this tutorial which will show you how to bypass the sometimes “overly meticulous” SmartScreen feature so you can be able to install downloaded programs that it identifies to be unsafe but in truth, they’re just less popular. If you’ve been left clueless and hopeless after seeing the SmartScreen feature notification telling you that the program is not safe to install then you’ll need to follow the steps below.

In Windows 10, all you need to do is click on the link that is found just below the notification which says “More info” in order to expand the SmartScreen Window and have the other options displayed as shown on the screenshot below

After clicking on the “More info” link, you should be able to see more information about the software program that you are trying to install to your machine as shown on the screenshot below and at the bottom-right portion, you should be able to see two new buttons which are labeled “Run Anyway” and “Don’t Run”. Since you want to install it, you’ll need to click on “Run Anyway”.

After hitting the button, you should now be able to install the software without the SmartScreen feature coming into your and blocking it from being installed. If you are using the Desktop version of Internet Explorer, you can also just click on the “More Options” link that is found at the bottom-left portion then hit “Run anyway” as you can see below. 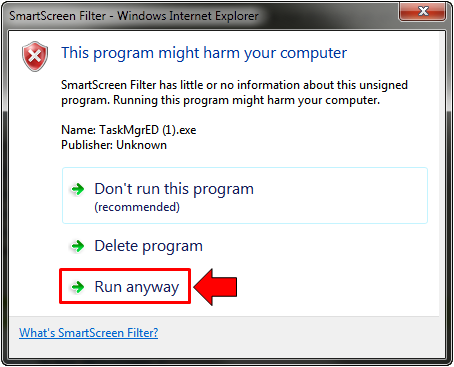 Once you are done clicking on the button’s that are shown above depending on the version of Windows that you are using, you should now be able to install that software program that you want and start using it on your Windows machine.

It’s Quite Annoying But it Keeps You Safe

As you can see, the Windows SmartScreen feature truly is a useful one that helps users have peace of mind even while browsing the Internet and downloading as well as installing programs taken from different websites. It sure is quite annoying at times but it’s designed that way so you can be protected against any problem that may affect your computer and the data that are stored in it. Have you even encountered this feature and you didn’t have a clue what it is used for? You now know what it actually does so the next time you see the prompt, you can choose to run a certain program at your own risk instead of just closing SmartScreen just because it doesn’t let you run the file.