Microsoft has done a lot of improvements and innovations and even added brand new features starting in Windows 8 down to Windows 8.1 and now in Windows 10. These changes did not receive a smooth welcome from long-time Windows operating system users but the company has still managed to make everything more welcome as the modern version of the OS transitioned to what we now know as the latest build!

It is interesting to note how engineers and developers in Microsoft are working round the clock to create the best Windows operating system ever that we are using now. If you are one of those who just made the move to Windows 10 after upgrading your computer or deciding to try it then you really need to learn more about “universal apps” also known as modern apps.

Now, let’s say that you already have installed these apps and you want to arrange them in the “Start” section of the Start Menu. How are you going to do it and what are the steps involved in accomplishing this trick in personalizing the Start Menu? That’s exactly what we’re going to show in this tutorial so be sure to get your Windows 10 machine fired-up and follow the steps that we’re going to show below.

Where is the Start Section Found?

What is the Start section? If you have tried using Windows 8 or Windows 8.1 then you should be very familiar of the Start Screen which contains all of the tiles and shortcuts of the universal apps (called modern apps back then) and as well as Desktop programs that are installed on your computer.

In Windows 10, this feature has been removed and the Start Menu (in its new and improved form) has been reintroduced complete with Desktop program shortcut and the universal app tiles found on it. The Start section is simply the area where the modern app tiles are found. To view this section, you will simply need to launch the Start Menu by pressing the Windows key or clicking on the Start Button and it should look exactly like the one shown below where the Start section is being highlighted. 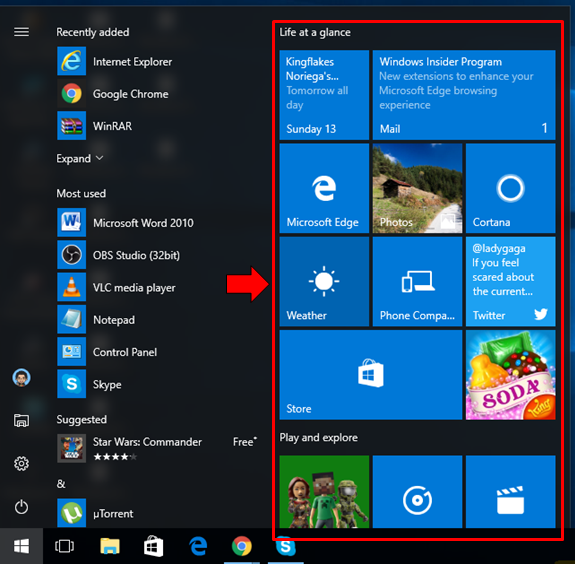 As you can see, the modern app tiles are arranged by default and they are already labeled in groups. The default groups are “Life at a glance” and “Play and explore”. There are only two default groups of apps that you can find but that doesn’t mean that you can’t add your own group into this section. As you will see later on, you can actually create a new group and label it according to your desired name for the apps and you can even change the name of the default groups. But before we get into that, let’s first learn how to make the Start Menu look wider to give more space for the apps that you will be grouping later on.

How to Make the Start Menu Wider

There’s a tweak that you first need to learn before grouping the apps that are installed on your computer. This trick will lessen the scrolling whenever you are on the Start section since the app groups will be arranged one after the other from left to right. To do this, you will first need to launch the Start Menu then once it opens, just point the mouse to the right edge of the Start Menu and once the mouse pointer transforms to an arrow that points to the left and the right then you can click-and-hold the mouse then drag it towards the right and you’ll see the Start Menu become wider. 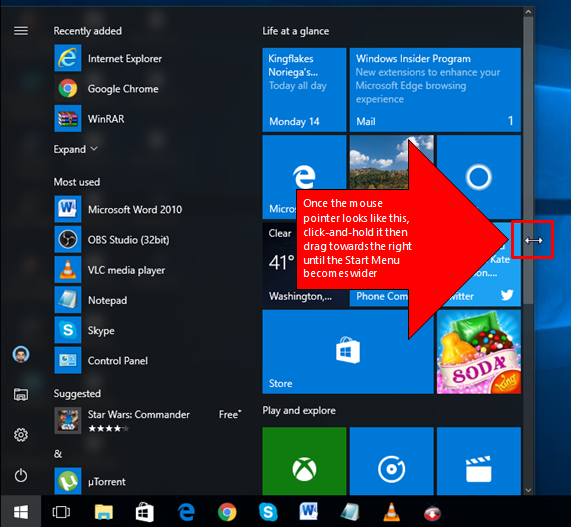 The end result after you follow the instructions above will be a wider Start Menu having a bigger space from modern app tiles on the right portion as shown on the screenshot below. As you can see, the “Play and explore” apps group are now on the right instead of sitting below the “Life at a glance” group. 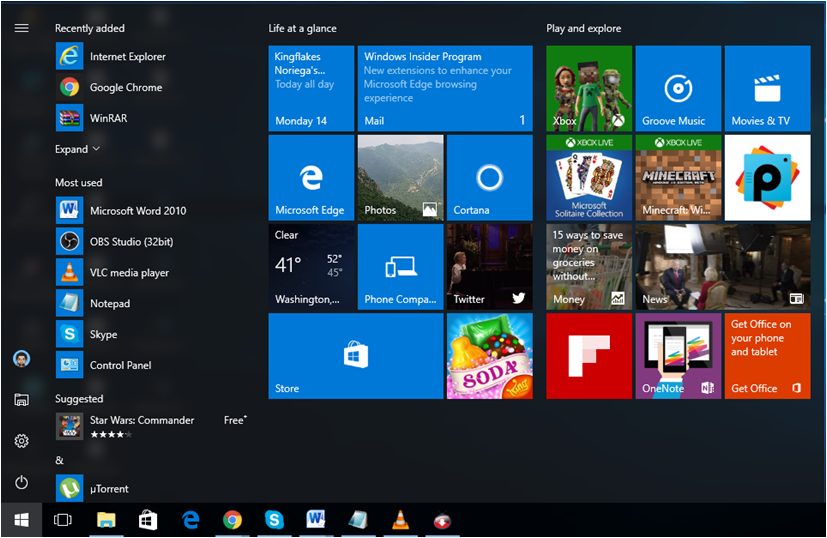 Now that you’ve resized the Start Menu making the Start section wider to give way for new app groups, let’s get to the next step which is moving and grouping tiles in it so be sure to get yourself geared-up to follow the steps for this next tweak that we’re going to show.

How to Move and Group Tiles Within the Start Section

So let’s get to the next step which is moving app tiles and grouping them on the Start section of your machine’s Start Menu. To start, you will first need to launch the widened Start Menu then look for the app that you want to move to a new group. Once you find it, simply click-and-hold on its tile then drag it towards the location that you want the tile to be. 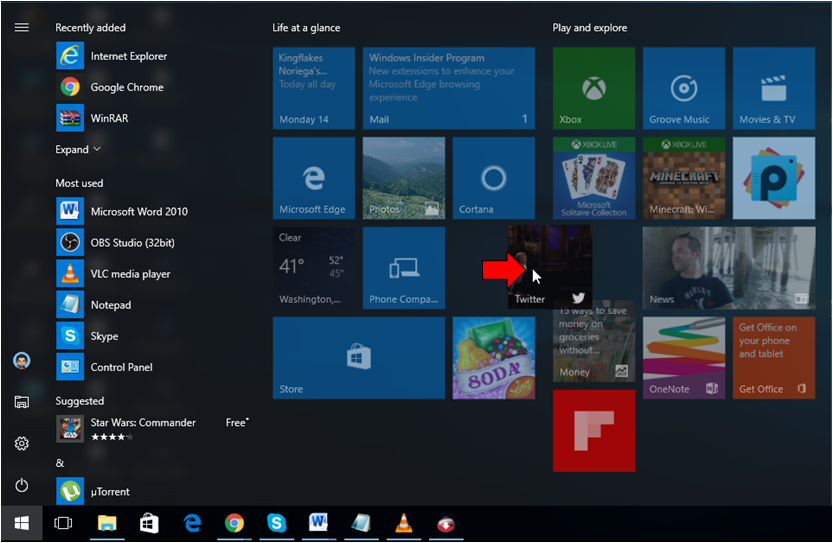 Once the tile is already on the location where you want to place it into, just release the mouse and it will automatically drop into its new location. Just do this same thing for all of the other app tiles that you want to group together and once you are done, you’ll now be able to proceed to the next step which is naming the new group that you have created or you may also choose to rename an existing default app group as you will see shortly.

Finally, we come to the last step that you need to learn in order to have a more personalized Start section on the Start Menu feature. To make the Start Menu look totally yours, you can name the new app group that you have just created. Doing this is very easy and the steps involved just takes like a breeze.

To start, you will need to put your attention on the two horizontal line that appears on the right-hand portion of new app group whenever you place the mouse pointer on top of it as you can see on the screenshot below.

Once this two-horizontal button appears, all you need to do is click on it in order to view the text input box where you can type-in the new name of the group that you have just created earlier as you can see below. 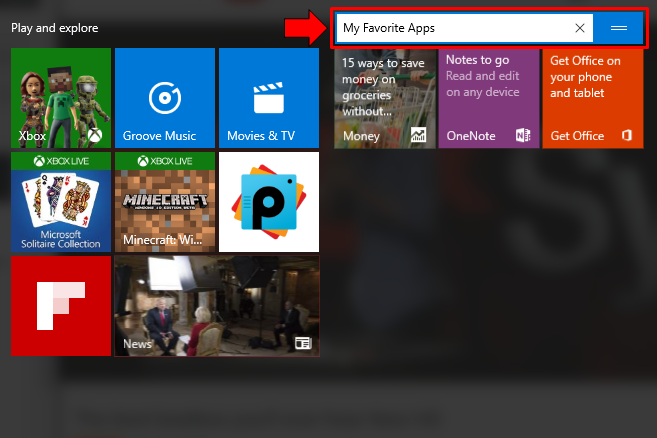 Aside from being able to name a new apps group that you have just created, you can also rename an existing one or the default ones that are included in the Start section of the Start Menu as you can see on the screenshot below. To do this, just point on the top portion of the default apps group that you want to change or edit the name of then once the mouse pointer is on it, you should be able to see the two horizontal lines button which you need to click in order to make the existing group name editable.

Once the existing/default name of the apps group becomes editable, all you need to do is to click inside the input box, delete the default name and input the new one that you wish to assign to the default apps group. That’s exactly how it is done and as you can see, the process just takes like a breeze.

As you install more and more of the modern apps that are found within Microsoft’s application marketplace known as the Windows Store, the tiles that represent these modern apps will become crowded on the Start section of the Start Menu and in time, it will be harder for you to find a specific application tile which you want to launch.

Grouping and naming the group you’ve created accordingly will help organize everything and clean-up the unnecessary clutter that can happen when these stuff are not organized and just take any place within the Start section. Now that you know how to do these tricks on your Windows 10 machine, you can start arranging everything and make your computer more organized and look personalized than ever before!