Steps in Turning Your Windows 8.1 Device Into an Access Point

Windows has never ceased to fascinate users ever since its very first version has been released for public use. This operating system which is one of the flagship product of Microsoft’s software line has really evolved from a simple PC based operating system to one that can now be found in a variety of devices including smartphones and tablets not to mention mobile computers like laptops and notebooks that have become popular in our modern world.

But the innovation never ends for this operating system because early this year, Microsoft has announced the upcoming release of Windows 10 in the second half of 2015. This operating system promises a lot of improvements taken from the inputs of “Windows Insiders” coming from all over the world but while anticipating for this new release, it would be a good idea to discover even more secrets in the latest version of Window dubbed as Windows 8.1.

Previous editions of Windows allowed the creation of ad hoc wireless networks to get different computers be connected to the Internet. This means that you will be able to create a wireless network by using one single computer’s connection. Sadly, the old and easy way in doing this can no longer be done in Windows 8.1 but don’t worry because in this tutorial, we will be showing you how to do this same trick even without the aid of a mouse and a visual user interface as it was done before. Just follow the steps that we will be showing below to be able to get your computer share its connection wirelessly without using any other device!

Before you can use your Windows 8.1 computer or hybrid device as an access point, you will first need to secure an internet connection and there are different ways in how you can obtain this. Here are the 2 different Internet connection scenarios that we have tested to work as a source for the wireless network that you are planning to create with your Windows 8.1 machine.

1. Connect your PC or hybrid device to an Ethernet or wired Internet connection (LAN). Most home-based ISPs offer this type of connection which allows PCs to be connected through wires but you can also connect your laptop to this kind of network cable. The port where you’re going to plug the cable in is shown below. 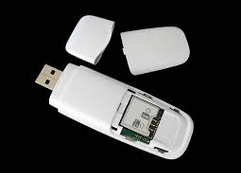 After making sure that your computer is connected to the Internet using the LAN port or through a USB modem/wireless card, it is time to start setting up the access point so you can connect your other devices like your tablet or smartphone to the Internet without using a WiFi router or any other wireless network device.

As we have mentioned earlier, creating an access point using the wireless network adapter of your Windows 8.1 computer which will serve as the broadcasting medium is done differently compared to older Windows editions but it is not really hard to accomplish. To start, you will first need to open Command Prompt with administrator rights.

Accessing this tool is very simple, just press the Windows + X keys and you will see a white menu box that will appear at the bottom-left portion of the screen and from here, you will simply need to click “Command Prompt (Admin)”. 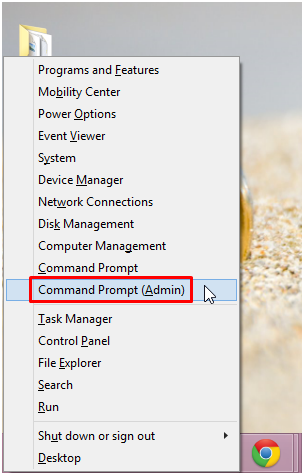 Now, when command prompt opens, you can start thinking of the name or SSID that you want to assign to the access point that you will be setting up. For illustration purposes, we will be using “WindowsTechies” as the SSID for the wireless network and “tutorials” as the network key/password (excluding the quotations marks on both). Now, what I’ll do on the Command Prompt screen is type in the following command. 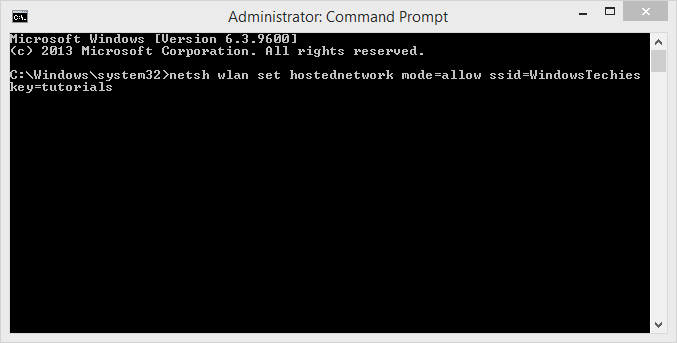 You can place your own choice of name and key in the “ssid=” and “key=” parameters respectively. To have the access point parameters (ssid and network key) setup, you will simply need to press the “Enter” key and if there are no problems and errors that would appear on the Command Prompt screen, it means that the name and the password for the access point is now ready. 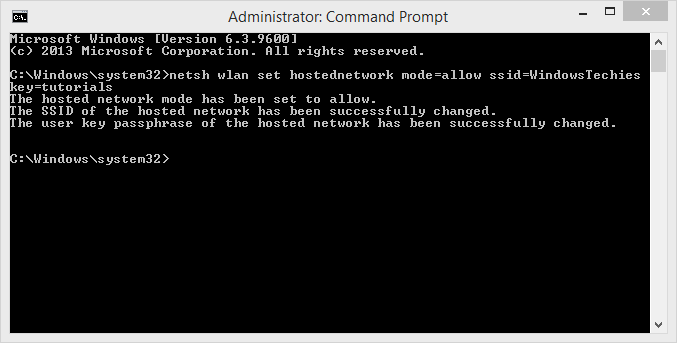 In order for your computer to start broadcasting the wireless network signal, you will need to type the following command and after doing so, simply hit the “Enter” key to execute it. 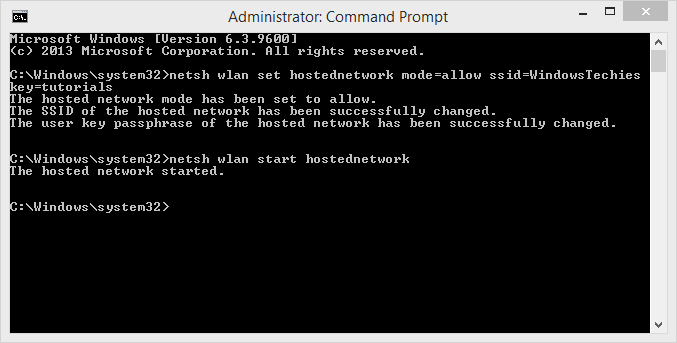 The access point will now start appearing on the networks section of your other devices however, there will be now Internet access yet but you can already use it as a sharing network where other computers can exchange files with one another.

Now, since the goal is to create a shared Internet connection among different devices using one Windows 8.1 computer or hybrid device an access point, you will now need to allow Internet access through it. To do this, simply right-click on the network connection status icon located on the system tray then hit the “Open Network and Sharing Center” option from the white menu box that will appear.

Once the Networks and Sharing Center Window opens, you will need to click on the “Change adapter settings” link that is found in the navigation pane at the left as highlighted on the screenshot below. 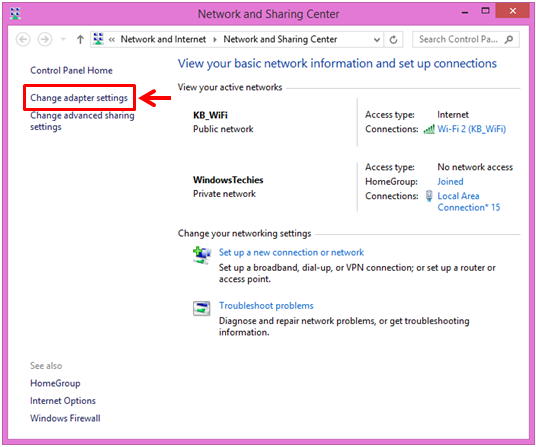 Then, there will be another Window that will open and from here, simply right-click on the connection that represents the network which you have created earlier and from the right-click menu that appears, simply hit “Properties”. 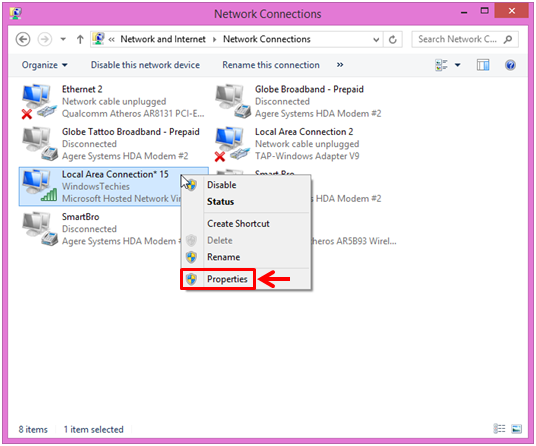 The “Properties” Window for the network will then appear and from here, you will need to click on the tab that is located at the top that is labeled “Sharing” so you can finally access the settings that will activate Internet connection for all the other devices that are connected to the network. From this Window, all you need to do is check the box that says “Allow other network users to connect through this computer’s Internet connection” then select the source of the connection which is the Ehternet or Broadband USB Modem depending on what you have used. Once you are done, hit the “OK” button at the bottom. 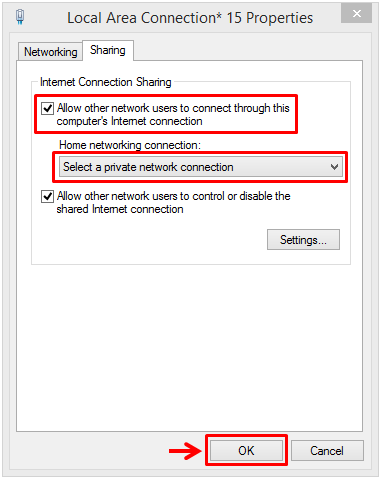 After doing so, the network should now be able to share the Internet connection with all your other devices but just to be sure, you can try it by connecting your smartphone or tablet to the network itself then enter the network key and see if you can now browse using the connection that is being generated by your Windows 8.1 computer or hybrid device.