How to Use the System Restore Tool (Windows 7 & 8)

Errors, viruses and other problems are inevitable especially if we often use our computer in doing a lot of tasks that involves surfing the Internet and tweaking some settings and values in the registry. More trouble also comes to the surface especially when drivers become outdated and the machine itself becomes sluggish but thankfully, Windows has a solution to this which is called System Restore. To learn what the System Restore Tool does and how to use it both in Windows 7 and Windows 8, just read on towards the end of this tutorial.

What Exactly is System Restore

System Restore is a tool that comes along with other Windows utilities and is used to reverse changes like registry tweaks and other system alterations that has caused Windows to become unstable. Windows System Restore works like the undo button that we commonly use when working with files and other documents but this one works with the system itself and restores harmful changes on registry keys, drivers, programs and other system files which may have caused problems with the overall system performance. Windows is not only vulnerable to viruses but with other problems caused by errors in the system itself and using the System Restore tool is the easiest and the quickest way of solving it especially if you are still working on some stuff and re-installing Windows just isn’t possible.

Windows System Restore is set active on Windows 7 and Windows 8 by default. This tool takes a snapshot of the system and all the contents on the drive and saves it in the form of “Restore Points” every time significant changes are done like software/program installation, driver update or other changes that does some tweaks to the registry. You can also create system restore points manually when you feel it is really needed so the next time you encounter some serious problem with your Windows computer that looks like impossible to fix, you should first the reverting your system back to an existing “Restore Point” and continue using your machine as if nothing happened.

Windows System Restore only reverts all changes back to the specified restore point. This means that all changes in the registry will be restored to a working state. Using this tool does not affect files and other documents which you were working on when you restored your system so it means that they are still intact even after a system restore process.

Launching the System Restore tool can be done in two ways in Windows 7. First, you can open a restore point which was previously created and perform the system restore task right away or open the tool itself so you can make further tweaks and choose other advance options before doing the process.

To open the System Restore Wizard, simply follow the steps below: 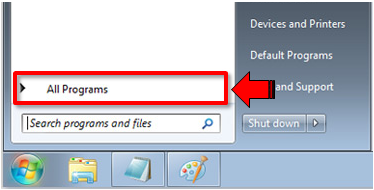 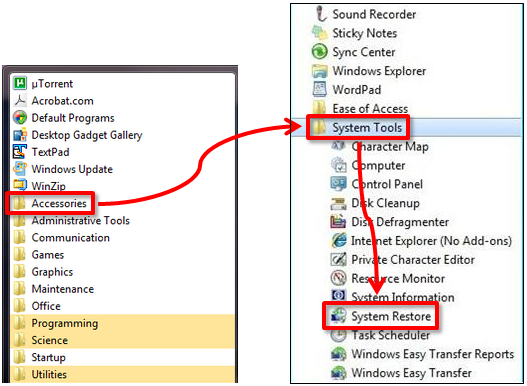 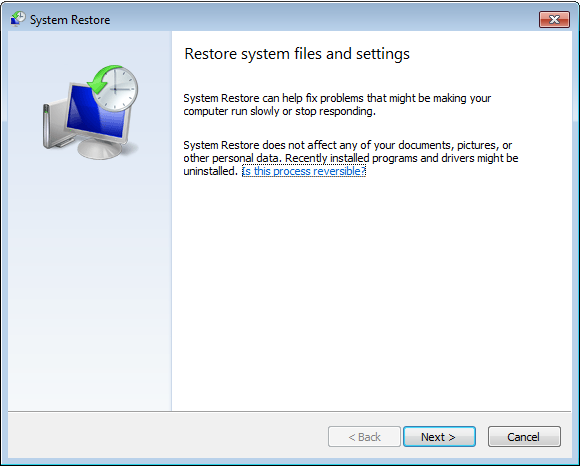 In case you want to manually create a restore point or edit the settings of the System Restore tool before starting with the process then you need to access the tool using a different path. Here’s how: 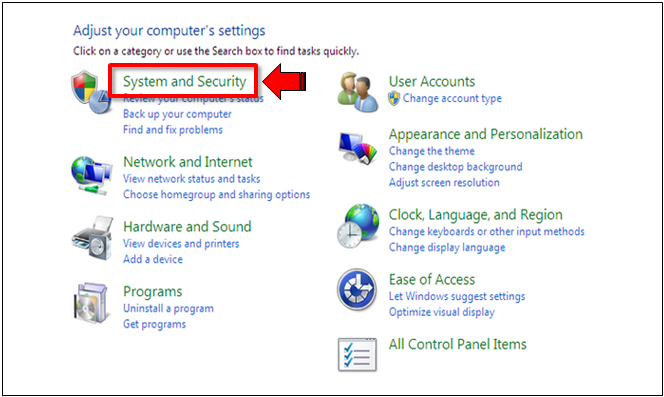 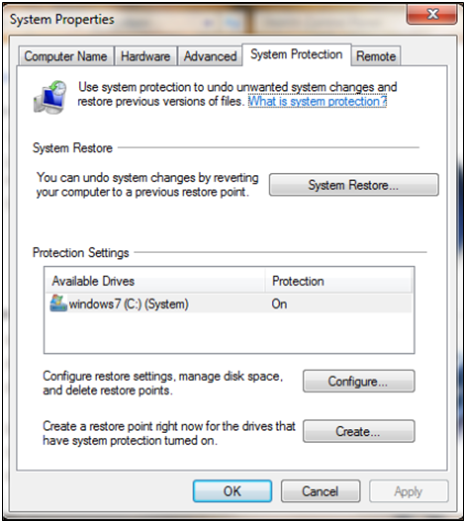 If in case your computer refuses to boot, you can still use the “System Restore” tool. To find out more about the details of how this is done, please read our article on “How to Use the System Recovery Options in Windows 7“. 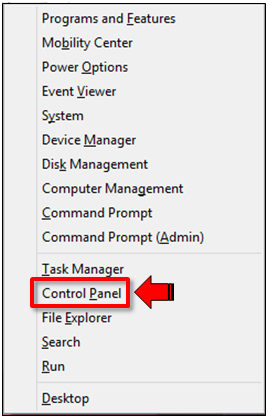 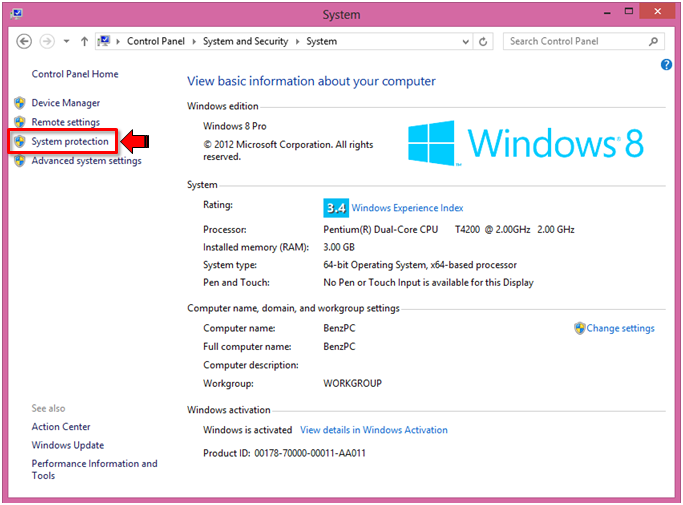 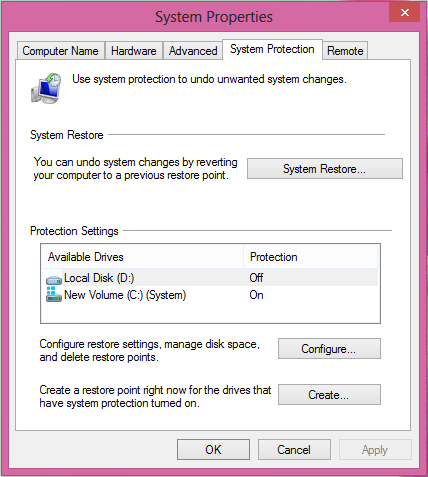 From this point forward, the process will be the same both on Windows 7 and Windows 8. The screenshots that I will be showing on the steps that would follow are all taken from Windows 8 but it looks basically the same on Windows 7.

Creating a System Restore Point on Windows 7 and 8

Creating a restore point both on Windows 7 and Windows 8 works basically the same. All you need to do is click on the “Create…” button located at the bottom of the “System Properties” Window. 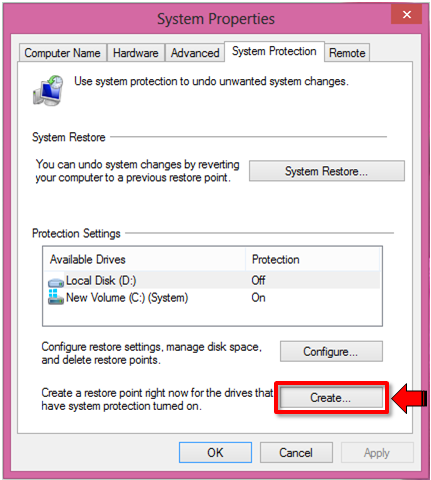 On the Window that follows, you need to type the name of the restore point that you want to create and afterwards, click on the “Create” button. 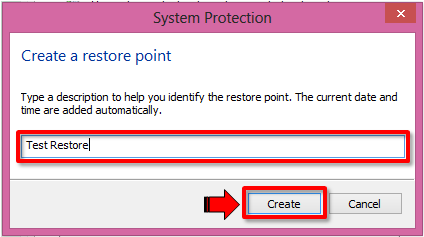 Next, another Window will appear which contains a progress bar showing the overall progress of the restore point creation process. Just wait for few minutes until it is done.

Once the process is done, you will see a prompt that says “The restore point was created successfully”. From here, all you need to do is click on the “Close” button located at the bottom and you can now use the restore point you created at any future time when you experience problems on your computer.

As you can see, creating a restore point and using it on Windows 7 and Windows 8 is not that hard a process. You can use restore points anytime especially when problems arise which affects the overall performance of your system. Doing a system restore is also a quick solution which protects the files that you worked on even after the process is done. Tell us what you think about this feature. If you have any concern about your Windows machine or other questions related to the Windows Operating System please feel free to post them on the comments section below.